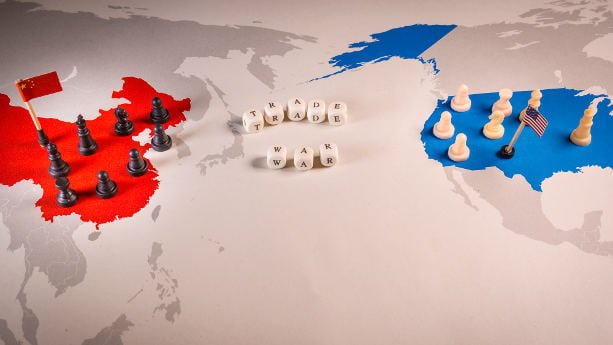 Like many others, I assumed the US-China trade war would be a short affair. I envisioned some deal involving mutual trade concessions taking place in a matter of weeks.

How wrong I was.

Now we are facing the prospect of a decade-long trade war, that will possibly mark the end of an era. Given that the United States is our main market, in terms of users, the trade war has a severe impact on our business too.

I’m not here to discuss which side is morally right or wrong. But I do have an obligation to share my views of how the US-China trade war may impact small businesses in the US, importing from China.

The trade war also comes with some unintended consequences, that have the potential to backfire massively.

As of September 2019, the added tariffs apply to the majority of products imported from China. By December, we can expect all products (with some exemptions) imported from China to the US to be subject to a 15 to 25% tariff. As trade talks have seemingly stalled, it’s essential for importers and Amazon sellers to prepare for what is likely the new normal:

2. These tariffs may even increase further in the future. It all depends on whether the US and China can reach some sort of deal.

3. For many product categories, it’s still not an option to simply shift orders to suppliers in other Asian countries. For most categories there simply are no factories outside of China. Hence, your option is most likely to either pass on the new tariffs to your customers – or not buy products at all.

The trade war is an ongoing affair, with two rounds already in place, and more to come.

I would also like to thank Gary Huang of 80/20 Sourcing for providing the initial product lists.

What going to happen next?

We are now at a point where the majority of goods imported from China to the US are subject to the added tariffs. Without a trade deal between China and the United States, it’s likely that we’ll see the tariffs being increased further.

25% is not the upper limit. Washington has already hinted that the tariffs can go even higher.

Products affected by the US-China tariffs

Tariffs initially targeted machinery and tooling, such as lasers and gas vessels. As such, the first two rounds had a limited impact on American e-commerce companies and Amazon sellers. A few examples follow below:

That said, the third round – covering $200 billion worth of imports from China – is far more comprehensive:

Products (previously) not affected by the US-China tariffs

So far, most ‘eCommerce products’ are not targeted. For example, the following categories are not subject to a 25% import duty rate:

UPDATE: This list of product categories are now subject to a 15% tariff

Currently, there is no end in sight to the US-China trade war. This situation could take decades to resolve, effectively becoming the new normal.

Importers need to assess if they can absorb a 25% cost increase, and plan accordingly.

Chinese companies keep selling duty-free into the US

Cross-border e-commerce, mainly through platforms like Aliexpress.com and Wish, has completely exploded in the last few years. This has largely been fueled by two things:

1. Packages valued below a certain threshold get cleared through customs tax-free. As such, a lot of products enter the US tax-free, while American importers must pay duties on bulk shipments.

This quote is directly from the US customs:

In fact, the ‘duty-free’ threshold was increased as late as 2016.

2. Chinese online sellers get massive ePacket discounts when shipping to the United States, but not the other way around. It’s often cheaper to send a widget from China to the US, than within the US itself.

American sellers were already at a major disadvantage, as you are taxed on the entire customs value. It’s no secret that Chinese companies, on Amazon and on Aliexpress, have gained a plenty of ground.

2. Throw in a 25% tariff in the mix, while Chinese sellers still get away with 0%

Additional tariffs would make it impossible for American importers to compete – on their home turf. If the US government decides to go this way, and implement more China tariffs, then they must also ensure that cross-border shipments are taxed at the same rate as ‘regular imports’.

Somehow, I doubt that will happen.

3. Is the future of US e-commerce dominated by Chinese sellers?

Imagine yourself browsing Amazon a few years from now, only to find that everything single product is shipped from sellers in Mainland China.

If the US decides to administer ‘death by a thousand taxes’ to its domestic importers, then this is actually a realistic scenario in only a few years.

The Chinese may not have caught up with the US in most areas, but they are damn good when it comes to ecommerce and logistics.

Let’s look at what the United States would lose in the process:

Simply ‘taxing the e-packets’ is not as easy as it might sound. We’re talking about tens of millions of parcels on a yearly basis.

What should US Importers do?

Given the likelihood that the situation continues to escalate, it’s high time for American importers to consider their options.

Option 1: Move to Hong Kong and become a cross-border seller

If you can’t beat them, join them. If it’s impossible to compete, as an American business paying taxes in America, then perhaps your business to Hong Kong.

I understand that this is not a realistic option for most small business owners, with a mortgage and a family. But I want to demonstrate the absurdity of the situation.

Go on Alibaba.com and search for watch manufacturers in Vietnam, and you’ll have a grand total of zero suppliers to choose from.

When it comes to many product categories, China is simply the only option. Sourcing suppliers in other Asian countries can work for certain categories, such as textiles and furniture, but not for all.

Notice that I just refer to watches to make a point here.

If you can change to a supplier elsewhere, then something you should absolutely consider. However, for most, that’s not an option.

In addition, Vietnam and India aren’t exactly laissez-faire free market havens either. It might only be a matter of time until additional tariffs are slapped on goods from these countries too.

Option 3: Pass on the cost to the consumer

Some brand-centric businesses might be able to get away with a price increase, to absorb the increased tariffs. But most do not have that luxury.

This might be the only realistic option for the majority of companies, in case all Chinese imports are taxed by a 25% tariff.

I’m sure that Chinese sellers would love to see their US competition just roll over and die.

Assuming the new tariffs will remain limited to specific categories, you can simply target products that are not on the tariff list. That’s, of course, easier said than done and only works for as long as a blanket tariff on all imports is not implemented

Importers based in the United States are not subject to US-tariffs when shipping products to other countries and markets, such as the EU, Canada, Australia, and Japan.

This might be the right time to start looking at markets outside the United States.

Will China or the US win the trade war?

Many self-proclaimed LinkedIn experts are not shy to speculate on why it’s absolutely certain that China will win this trade war on walkover. They state that China can ‘simply wait it out’.

What is not entirely clear, however, is what such a victory would look like.

Will the US simply abolish all tariffs on Chinese goods, while China is allowed to maintain high tariffs and non-tariff barriers to foreign imports in perpetuity?

Will the US pay ‘trade war reparations’?

Or perhaps, fly in Pompeo to kowtow on prime time in Beijing? All of this is, of course, absurd, and will never happen.

There aren’t necessarily any winners in this war

China stands to lose a lot. Contrary to many ‘expert claims’, you can’t simply make up for a lost market by exporting your goods elsewhere. Anyone with even the slightest business acumen understands this.

Yes, China can ‘wait it out’, and face enormous losses in the process.

When it comes to the United States, it’s a matter of both investing in the domestic industry, and help suppliers in Vietnam and India expand into new products. But for now, China is the number one manufacturing base for a vast range of products.

That said, as I explained earlier in this article, the US stands to lose a lot more if American importers are priced out of the market.

Either way, nobody is going to ‘win’ this trade war.

Will China eventually give in to US pressure?

No, at this stage, it’s impossible for the Chinese to simply ‘give in’ to US demands. Doing so would be a huge (domestic) political risk that Beijing can’t afford.

If there is ever a deal to be made, it must be something similar to the EU – China solar panel tariff negotiations a few years back.

Rather than the EU slapping a tariff on Chinese made solar panels, they took a much more pragmatic stance and ‘helped’ the Chinese save face by agreeing to a minimum unit price.

What should the United States do?

I’m not American and have never lived there, so I rather not lecture the US in how to run their own country. That said, I think the following measures would be effective:

This would go a long way to level the playing field while stimulating the domestic industry.

Further, we shouldn’t forget that a large share of China’s worldwide exports is US-owned. Nor should we forget that many of the products manufactured in China today, where never manufactured at scale in the United States, to begin with.

That said, I don’t imply that these tariffs are without merit.

I understand why this is happening.

What do you think?

This article is partly based on unfolding events, partly on speculation from my side. Leave a comment below to share what you think about the ongoing trade war.