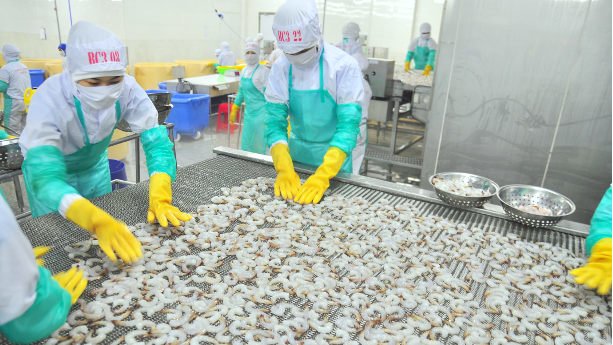 Looking for a seafood producer or wholesaler in Vietnam? In this guide, we list some of Vietnam’s leading seafood exporters, supplying fish, shrimps, crab, canned products and much more. Each company profile includes an introduction, main products, and certification.

Viet Asia mainly exports its products overseas to markets such as the EU, the US, Australia, Japan, Korea, UAE, China, and Singapore.

Siam Canadian is a food trading company specializing in processing and exporting seafood and meat. Particularly, Siam Canadian focuses on the production of frozen seafood and makes it the core business of the company.

The product line of Siam Canadian covers a wide range of seafood products, including shrimp, fish, and cephalopods. In 2019 alone, Siam Canadian’s products were exported to over 70 countries.

Founded in 1976, Seaprimexco Vietnam is considered one of the leading frozen shrimp exporters in Vietnam. Seaprimexco is headquartered in Ca Mau City and has an affiliate office in Ho Chi Minh City and 3 processing factories. The production capacity of the company reaches up to 6,000 metric tons per year.

Kien Hung was established in 2000 as a frozen seafood processor and exporter. The company currently has 3 subsidiary corporations, operates 6 offices in Kien Giang Province and has a production capacity of up to 3,000 tons of frozen seafood annually.

Kien Hung primarily processes squids and several kinds of fish. In addition, the company also has a fishmeal factory mainly producing high protein fishmeal, which the production capacity is up to 1,200 tons per year.

Pinetree Vietnam is a Singaporian-Vietnamese company that was established in 2015, and specializes in the processing and exporting of Vietnam’s aquaculture and agriculture products, mostly providing frozen, dried and canned seafood.

Pinetree offers different processing and preserved solutions for the raw materials, such as head-on, shell-on, headless shell on, peeled deveined tail on, peeled and deveined, and other.

aFishDeal was established in 2007 and specializes in exporting fish and seafood from Vietnam. aFishDeal exports its products to the US, Colombia, France, Singapore, Morocco, UAE, Malaysia, Pakistan, Laos, Indonesia, Sri Lanka, Estonia, Finland, and Chile.

An My Fish JSC

An My Fish JSC is an aquaculture company located in An Giang Province, established in 2007, and specializing in aquatic product cultivation, processing, and exporting Basa fish.

An My Fish developed an aquatic farm with an area of 70 hectares especially breeding Basa fish and Tra fish. It also has a 45,000 square meter processing factory to better implement quality control on its exported products. In 2017, the total employees of An My Fish JSC were more than 3,000, with a production capacity of over 7,000 metric tons.

An My Fish also processes value-added products from pangasius fillets such as fishball, tempura fish, and breaded fish.

Mo Chuiyan has an MA in Islamic Studies from the Hebrew University of Jerusalem. She has previously worked as a marketing developer for Middle Eastern countries in an E-commerce company. She has also worked as a merchandiser in the garment industry, where she gained expertise in material sourcing and production management. She currently works as a content editor for Chinaimportal.com

1 Responses to “List of Seafood Suppliers in Vietnam: Our Top 9 Picks”