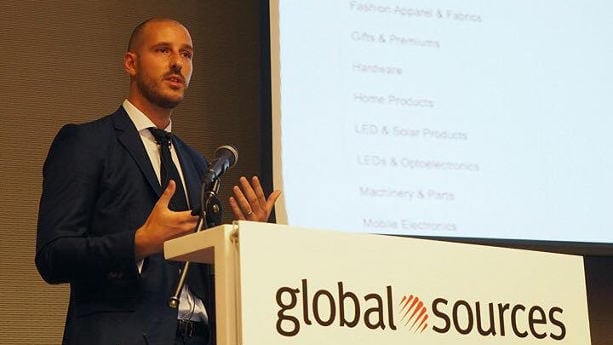 Click Here to Get the
Asia Import Platform: General Products

Manuel Becvar, originally from Austria and now based in Hong Kong, is one of few experts that master both the domain of sourcing and production, and that of eCommerce and retail sales.

In this article, he explains what every importer must know to remain competitive on Amazon.com in the future, what sales channels he is currently using (and avoiding) – and why the number of sellers is likely to be reduced.

Manual, what brought you to Hong Kong in the first place?

I used to work for an Austrian DIY retailer called bauMax in one of their stores where I did an apprenticeship. I worked there until I was called in, to work in their head office near Vienna.

I was offered a position in the import department of that company. 6 months later I was asked if I wanted to do an internship in bauMax’s buying office in Hong Kong and I immediately said yes.

So I moved to Hong Kong in 2005, 22 years young with lots of ambition. I didn’t want to leave Hong Kong because I was so fascinated by its atmosphere and opportunities.

Unfortunately, there wasn’t a position available in that buying office for me, I was supposed to go back after my internship. So I was forced to look for a new job if I wanted to stay.

From 2006 to 2010 I worked for 3 different companies in sales, marketing, purchasing and product development. I worked for actual manufacturers and trading companies developing their customers as well as new products. In 2011

I was offered a position in the company that originally sent me.

They had grown to over 400 Million in turnover and needed to increase their Product Managers. So I went back to that company and handled electronics, household items, garden, solar and other consumer products.

I was in charge of negotiating prices with suppliers, develop assortments and grow the turnover with the buying office’s partners.

Among the partners were REWE, bauMax and Coop Switzerland, some of Europe’s biggest retailers. I learned a lot in those years in terms of manufacturing, negotiation, product sourcing and customer acquisition.

In late 2013 I decided to start my own company. At this point I wasn’t even aware that Amazon allowed third party sellers to sell on their platform.

So naturally I started to sell to retail because that’s where I had my contacts. Getting into retail can be tough and a lot of work. By late 2014 I first heard of Amazon FBA but by this time I already had some orders running with retail.

Some of my retail or import customers were very small and they had no clue about importing procedures.

Often it was the impression that you can buy anything in China with any quantity within a few days. Obviously, that’s not the case so instead of educating each customer with phone calls, emails and so on, I wrote a guideline.

That guideline quickly became an actual book titled “The Import Bible” which is to date one of my most successful books (I wrote several).

You’re an experienced Amazon seller. Please tell us a bit about that.

In August 2014 I partnered up with a friend who already had an Amazon account. I did the sourcing and product management and he took care of the financial part and Amazon backend.

Within a year we had over 10 SKU’s online which were all unique. Around Nov 2015 I started my own Amazon account and did a public case study (available on my page) where I showcased the entire background of sourcing, product & supplier management, shipping, inspection and finally launching on Amazon. It was a big success since no one had ever done this before.

Our first few products were in very unique and new niches (Virtual Reality). Later, when I launched my Mandarin-Gear brand I went into household products, electronics and outdoor items.

I did already have a sourcing company at the time I started selling on Amazon but I wanted to diversify.

Sourcing, consulting and coaching can be very time consuming and I wanted physical products online that sell and make money while I am sleeping.

Would you say that it was easier to make it as an Amazon seller when you started off, as compared to now?

When I started (late 2014) a lot of people already said it’s overcrowded and I was concerned. But as it turns out as long as you have a unique and Rockstar product or product line you can always be better and make money.

Obviously it helps if you have social media following, email list and an audience that already loves your brand.

Last year we saw a big increase in sellers and that number nearly doubled in January 2017 when Amazon allowed new sellers again.

They briefly shut down the registration program in Oct 2016 because they didn’t want too many new sellers send in inventory that would maybe not sell and burst their warehouses for Q4.

What’s also interesting is that it is getting very competitive on generic products. In October last year when I went to she shows in Hong Kong and China I had a list of over 40 potential items that I saw at the exhibitions.

When I sat down in November to do research I realized that I only had 2-3 items that weren’t already selling on Amazon. So it’s getting saturated and the key strategy for 2017 and onwards will be unique products, diversify and branch our in other sales channels.

It definitely makes sense to consolidate or cross over in similar categories with products. Often times the suppliers have many categories that you could just buy from one source. You can bundle and buy from 1 source.

I’d like to hear your predictions about the future. What will it take to be successful on Amazon.com in the future?

There’s a lot of new sellers coming in these days, but I only see 1 out of 10 succeeding.

That is because some guy who’s imported for 2 months and now has a podcast and course tells them to go on Alibaba, get a sample take action and start selling.

There’s so much more to it. Compliance, supplier selection, launch strategies, building an email list etc.

So we will see a lot of these new sellers disappear over the next few months. Yes, the competition will grow, but only those who truly invest in knowledge and educating themselves will make it.

I guess it’s harder to make it with private label only?

You could say that. It’s good to have a few SKU’s on Private Label that you built from scratch.

But it also makes sense to buy and test from wholesalers in the US or Europe, for example, and sell their brand to test the product before you start private labelling it.

Will Tjernlund has been doing this for years, I see him at every conference that I speak as well and he is doing amazing numbers.

So, to succeed, sellers need to design their own products?

Definitely. Unique products are the key to get into your customers minds. While they may be more difficult to launch as there might be no keyword or market there yet, they will make more money in the end.

By the time I am getting copied with my unique product I already have 2 new ones in production, so people shouldn’t worry so much about that. It’s just part of the business, move on.

Far more Chinese sellers are also present in these days. How can Western based sellers remain competitive?

There’s not much you can do. You certainly can’t beat them on price that’s for sure.

So we will also see a lot of small time Chinese sellers disappear. However, Amazon is doing a lot of work in China these days to train sellers. So it won’t be easy.

They key is to diversify in income streams, branch out into other sales channels and retail and just put more effort into customer service.

E-Commerce is so much more than just one marketplace. What other sales channels are you using yourself?

Amazon is great to kick start your brand. But once you see good numbers you must immediately set up your own shop.

You want to be in control over prices, customers, trends and inventory.

Set up your own eCommerce shop, ideally Shopify. Send in inventory not on to Amazon, but also an inventory storage that integrates with eCommerce sites.

Then you also want to sell on other marketplaces like Jet.com, newegg.com or sears.com and others.

Personally, I walked away from ebay because its customers are a nightmare. So you’ll have 4-5 sites where you sell your products.

And it’s all fulfilled from one inventory storage facility. And don’t stop there. I mean there are other countries that you could venture into.

Start with all the Amazon countries outside the US (EU, Japan) then check out the local big players like Lazada in Southeast Asia or Zalando in Germany.

I personally have about 20 products spread across 5 different sales channels (excluding retail). While Amazon is definitely the lion’s share imagine what 4 additional channels can make you in a day.

What will we see in the future?

Hopefully we will see the herd of sellers thin out and only the sellers who care about their customers and are not just here to make quick money.

Because that improves the marketplace, quality of products and level of professionalism with suppliers in China.

Do you think Amazon and Facebook will completely dominate E-Commerce in the future, or is there still space for independent online stores?

Yes, Amazon and Facebook is growing and growing. Just yesterday I read that Jeff Bezos is now the 2nd richest man in the world. A few years ago he wasn’t even in the top 30. I think that says it all.

Consumer and especially the Millennials will buy everything online. Be it on Amazon or Facebook or other sites. ECommerce is the future.

Retail shouldn’t be discounted and will always have a share in the market, but only the biggest will survive. Those bricks and mortar or smaller retailers that don’t go into eCommerce now will disappear in 2-3 years.

You’ve recently also launched a course. Please tell us a bit about that.

Yes, I have just launched a new course called “ImportDojo Brand Evolution”. It is pretty much all about what I just talked about. How important it is to branch out into different sales channels, have your own site up and build an audience, email list and brand in the process.

It also includes basics like incorporation, branding, packaging, creating unique Rockstar products, how to approach retailers the way I did it and a lot more.

It’s a 11 module course that took me 8 months to finish, but it is extremely comprehensive and teaches students how I built my brand from scratch. People can check it out here: www.importdojo.com