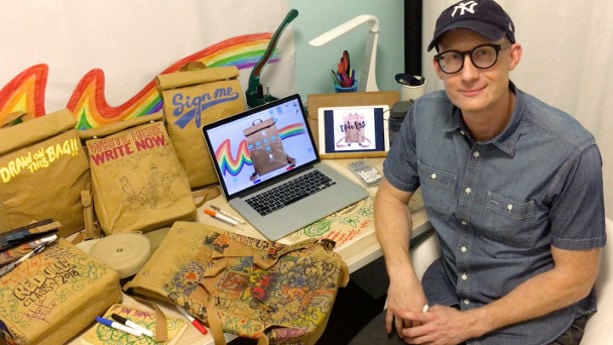 In this customer success story, John explains how he managed the process, from finding the right supplier and making product samples, to design patents and trademarking.

I believe this product will become really big, so don’t forget where you read about it first!

(And btw, you’ll get something extra at the end of this article)

John, please tell us a bit about your background and why you ended up moving to China.

I’m American, and grew up on the east coast of the US. I worked professionally as an artist, actor, and director in NYC and regionally before moving to Sydney, Australia in 2017 where I helmed the Creative Arts department of a large private school for four years.

I then moved to Guangzhou, China to help launch both the Art and Drama programs at two separate international schools here.

While here, I realized I had the great opportunity to try my hand at manufacturing some of my own design ideas. 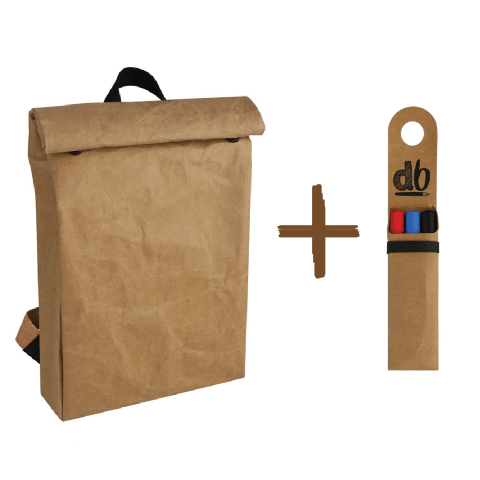 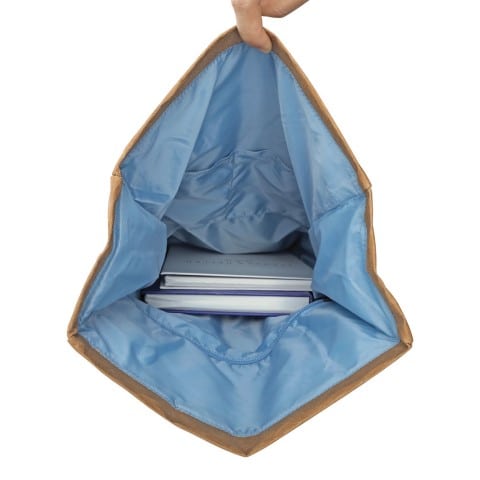 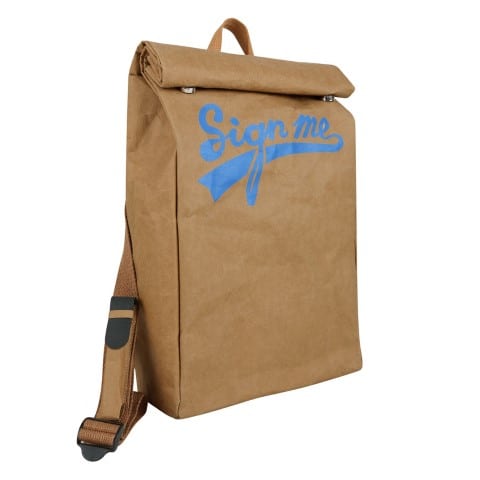 I was really impressed the first time I saw your product. How did you come up with this concept?

The DrawBag is basically three existing things combined in a new way: a backpack, kraft paper, and writing/drawing utensils. I had seen kraft-paper emerge as a usable material in fashion bags in the months leading up to my conception of the DrawBag, and while out idea-hunting at the Canton Fair early in 2017, I suddenly made the connection between these three existing elements, which to me as an artist seemed an obvious combination worth creating.

My initial design idea was to create a graduation-specific backpack for high school seniors with which to collect signatures and well-wishes from friends in the last week or so of school, but this idea quickly expanded into a bag that was less specific in its application, and more open and inviting to the unique personality and creativity of each owner in how they might design and use it.

You also signed up for the Starter Package. What made you decide to do so?

When I started my company in 2017, I had a concept for the DrawBag, but no experience in manufacturing. I discovered Chinaimportal.com while searching for answers to my many questions online.

After navigating around the site a bit, it became clear you were quite knowledgeable about the whole process and aware of the typical concerns the owner of a startup like me was likely to be having. I joined one of the free webinars, chatted a bit with Fredrik [co-founder of Chinaimportal.com], and was quickly convinced that the Starter Package would be a great aid in getting me from design to finished product. 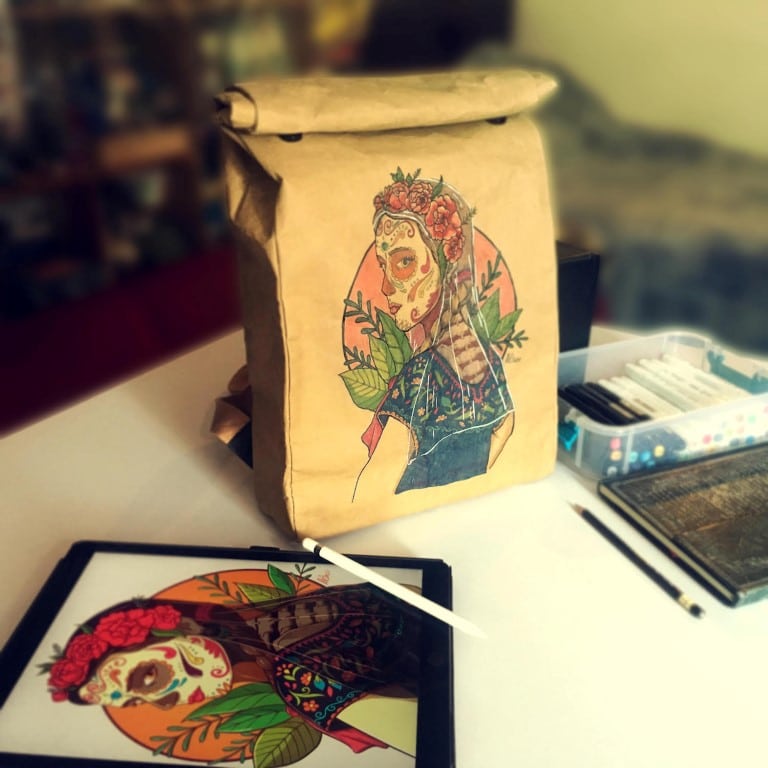 How do you believe that the Starter Package helped you with bringing your product to the market?

When I purchased the Starter Package, I was already in the early stages of manufacturing. I had settled on two factories here in China, and had produced a few prototypes to work from.

However, I was trying to get my head around the requirements for things like external hangtags and interior fabric tags when importing to foreign markets.

I was aware of the increasing legal requirements and financial risks involved in the process, and I wanted to be sure I was proceeding wisely as well as wanting to review the early stages I had already completed.

The Starter Package allowed me to identify areas of concern and work through them systematically so that I felt secure moving forward in the manufacturing process.

As the single owner and operator of a newly founded company, it was important not to feel alone in this, but to work with someone with the right experience to guide me. 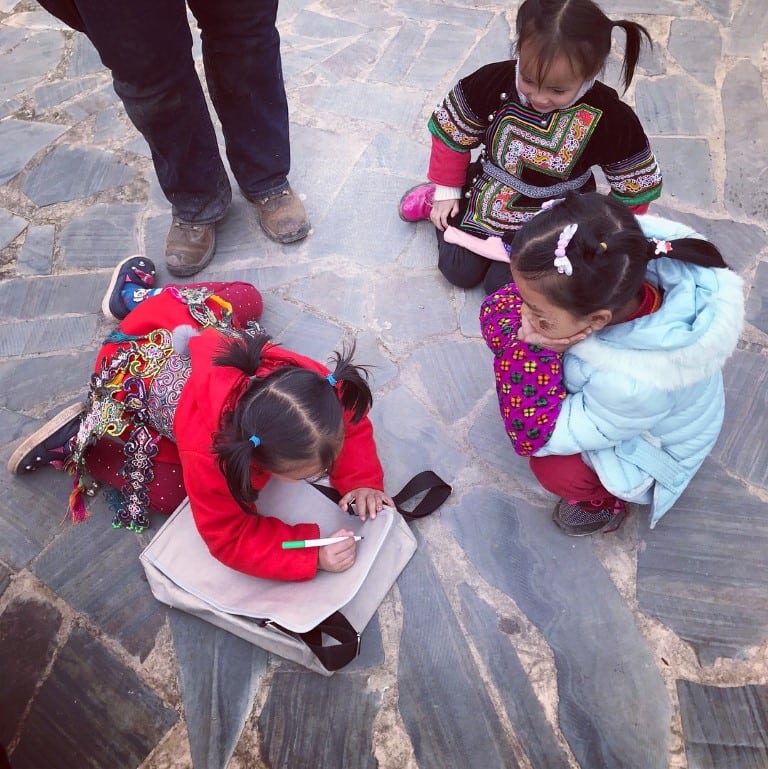 Did you design the product yourself, or hire a designer?

The original DrawBag design was my own, but what naturally happened over time was that a close collaboration developed between myself and the bag manufacturer.

They happen to have a terrific design team and product line of their own, and our working relationship broke some stereotypes for me about what working with a Chinese manufacturer is like in that they often offered their own design solutions to the process for free.

The product specification was originally communicated verbally to the manufacturer, and through various email exchanges. This was also augmented with photos exchanged via WeChat (a mobile social media app used extensively in China).

In this process, a number of features and materials changed, including more biodegradable fabrics, recycled plastic, and and an EVA mid-layer for water-resistance. 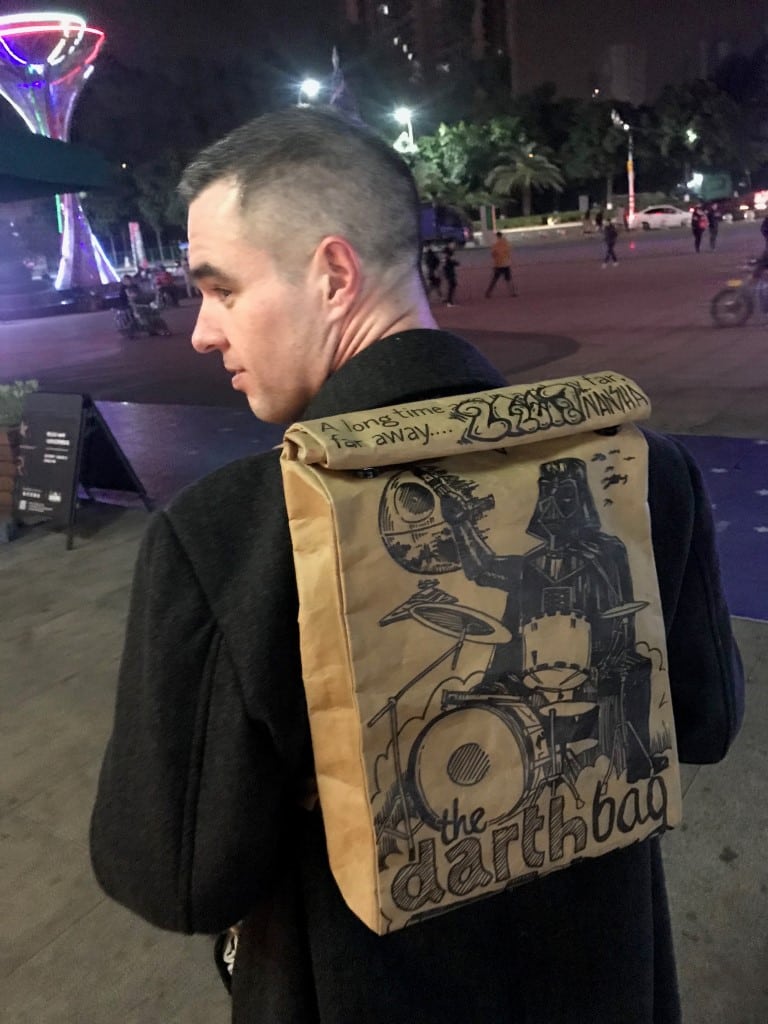 The force is strong with this one

Did you face any challenges when dealing with the suppliers, or developing your first product samples?

My relationships with the manufacturers of the DrawBag and its markers have been quite healthy and productive. Going from product specification to first prototype of the bag took about three weeks during early summer of 2017, while developing the first version of the marker took about twice that time.

Both were remarkably helpful in this process, and actually allowed very low volume runs on both products, which is rather unheard of. The first run of the DrawBag was only 1000 units while the markers were limited to around 10,000.

I believe this had to do with a mutual ease we found in working together, as well as a faith both manufacturers expressed in my brand and me as a startup. In 2018, I’m hoping to reward this trust with a much higher production volume.

I should mention, though, the darker side of sourcing factories. I had an experience in the previous year of two manufacturers accepting prototypes for two completely different products and then dropping communication with me in the following months.

Whether those prototypes are now simply gathering dust or are being replicated under someone else’s brand names, I don’t know.

One of the two manufacturers was found by a collaborating partner with whom I had entrusted the sourcing. The other was a manufacturer I had found through the Canton Fair.

We hadn’t done any background checks on either, but made some assumptions based on our interactions with them and from our tour of their factories.

I learned from this that knowing the track record of a manufacturer is crucial, and is one of the services that Chinaimportal.com offers. 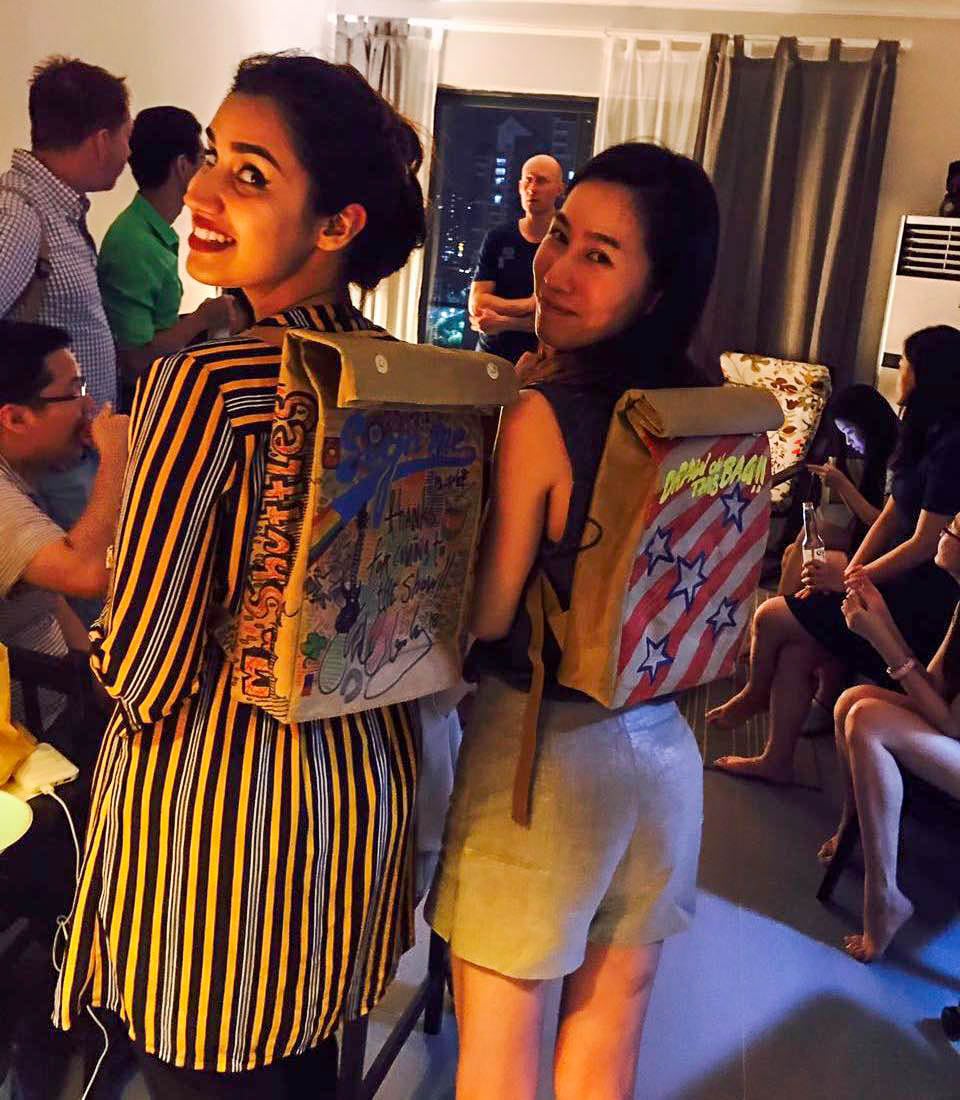 That leads into my next question. Did you file for a design patent or register a trademark?

One of the very first things I did was to submit a provisional application to patent to the USPTO for what is now marketed as the “Signature DrawBag”.

I had a freelance patent researcher draft this for me, and then months later after acceptance and when I had further refined this design a bit, I submitted a design patent application I had drafted and illustrated myself.

Just this week I received notice from the USPTO that the trademark for the DrawBag (the name itself) and its special mark (the name as a visual logo) were accepted and will be printed in the updated trademark register. That’s an exciting first for me.

In addition, I have about five related provisional and design patent application currently under examination by the trademark office. 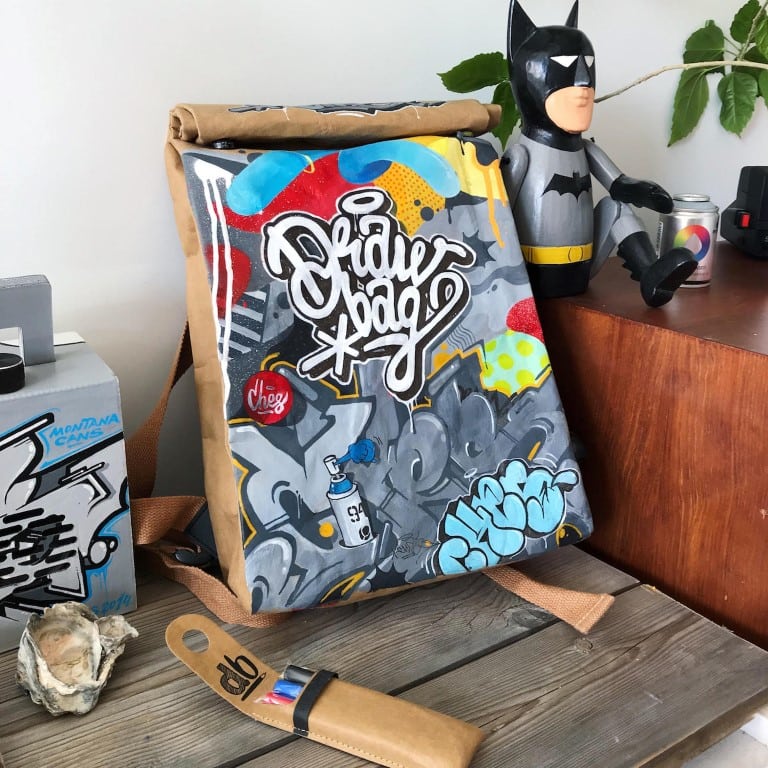 If you could go back in time, is there anything you wish you’d done differently?

I feel really fantastic overall about how this process has worked out for me and the DrawBag with the help of Chinaimportal.com and the Starter Package, although I definitely would have avoided the aforementioned manufacturer who made off with my other prototype. 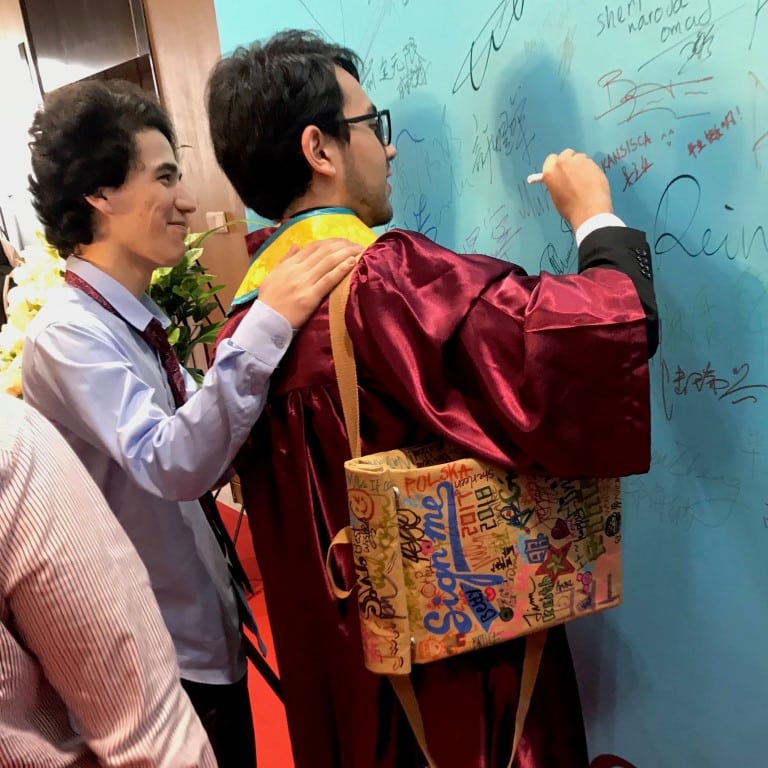 How did you manage your first order?

My first manufacturing run consisted of only 1000 bags, which is quite unheard of. 10,000 bags minimum would be much more expected. But over time, my manufacturer has expressed a growing belief in the both my brand and product line, and wishes to grow alongside it.

We hold a manufacturing contract, and also a contract allowing the manufacturer exclusive rights in China to sell the first version of the DrawBag domestically through their TMall store.

I performed a quality inspection of both bag and marker factories with a Chinese partner in the summer of 2017 and will maintain this process with a supply chain manager when the DrawBag scales up in 2018.

Although the quality has been great so far, this will be something to pay more close attention to as manufacturing volume increases.

I did order a number of lab tests through Chinaimportal.com which were quite efficiently handled.

The lab also anticipated and communicated some regulatory changes in the CPSC during the first year of the Trump presidency, and how these changes might affect me. 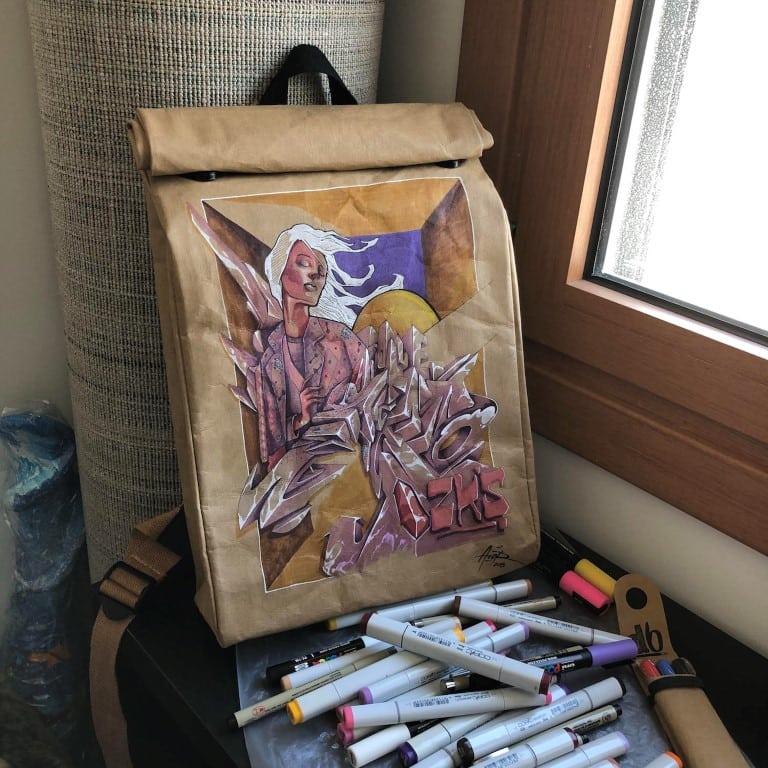 How do you plan to sell your product, now that you’ve launched?

The DrawBag is sold through my own website, utilizing WordPress and WooCommerce running the Storefront theme with a variety of tweaks. I intend to further develop the brand and site, including an online artist’s community, blog, and connection to social media there. That strategy addresses some of the more niche audiences and their own unique interests.

For a more general audience, I plan to more immediately expand through major distribution partnerships in the US in 2018 which may include a TV campaign and retail channels such as Target and Wal-Mart.

I’ve intentionally avoided Amazon at this stage for some of the reasons you have mentioned in one of your blog posts. 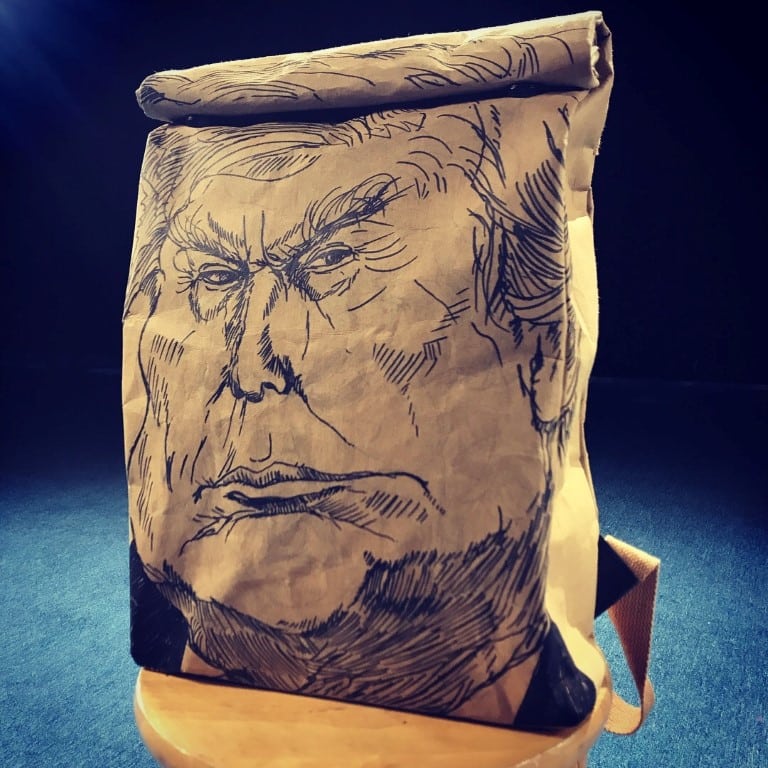 Thank you John. Where can our readers learn more about your products?

Jump on the official website, and have a look around! Signing up for the Drawbag Newsletter will provide information on new products as well as unique promo codes.

Speaking of which, if you enter the promo code STARTERPACKAGE during checkout, you’ll receive 5% off your order for having found us through Chinaimportal.com.

All DrawBag owners are encouraged to share their unique designs using #thedrawbag, or by connecting on Facebook. There’s also an Artist Gallery on the site under development where professional artists from around the world will be featured with DrawBags they have personally designed.

So please do join the DrawBag crew! I think we’re going to be one of the most unique new products and creative communities seen in 2018.

[i]
[i]
We use cookies to ensure that we give you the best experience on our website. If you continue to use this site we will assume that you are happy with it.OkRead more