Looking for a reliable and cheap air courier for your imported products? In this article, you’ll get a complete overview of the largest American, European and local air courier companies operating in China – including the following:

We also cover Amazon’s plans to step into the international logistics market, and how you can find the air courier with the best prices and service.

DHL or DHL Express is a German-based courier service founded in 1969. The head office of the company is based in Bonn, Germany.

DHL is also ranked as the world’s largest courier service with its presence all over the world including China.

DHL has a presence in China for the last three decades with its regional head office located in Beijing. It’s now known as one of the leading courier and logistic companies in China out of 35,000 companies working in the same market.

Some of their core delivery and air freight services include:

FedEx is a world-leading courier service based in the United States, but its regional offices located all over the world, including China.

It was founded in 1971 but evolved into one of the largest courier services in the world in less than four decades.

FedEx first started its services in China in 1984. The head office is situated in Shanghai with more than 9,500 employees in China. They have a total of 82 branch offices while 220 cargo flights operate from China every week.

FedEx is also among the few foreign (non-Chinese) based courier services with a license for domestic shipping.

The services offered by FedEx include: 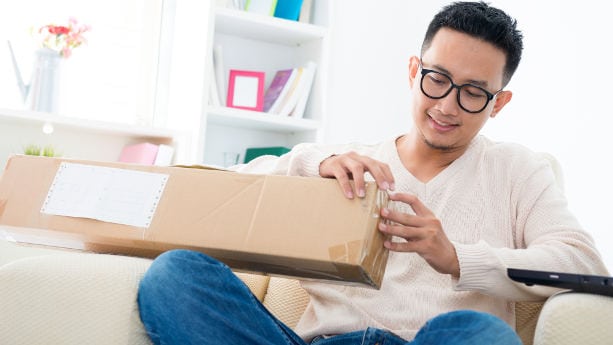 UPS started its services in China in 2001 in partnership with China Express and started the first non-stop delivery service to China in 2005.

The head office in China is based in Shanghai, with two more regional offices in Guangzhou, and Beijing.

UPS also has a license for domestic shipping within China. As such, they can also arrange deliveries from one supplier to another.

That can be useful when coordinating material purchasing from several suppliers, which is common in the textile industry.

Some of the prominent services offered by UPS are as follows:

TNT Courier is also a well-known international courier that is based in Liege, Belgium. In 2015, FedEx bought TNT, but it still operates as a separate company.

The company was founded in 1946 in Australia but later shifted its headquarters to Europe. It today operates in 61 countries, including Mainland China and Hong Kong S.A.R.

The head office of the company in China is based in Shanghai, established in 2004. In addition, it has regional offices in 37 cities in China.

The services offered by TNT include:

The head office of the company is based in Beijing. With around 1 million employees, it is the largest China-based courier service in the country.

In addition to its domestic services to all cities and towns in China, Hong Kong, and Macau, it also offers international shipping and air freight services.

It has more than 82,000 branches and post offices and 5 courier aircrafts.

The services it offers for international shipping include:

China EMS is also an easily accessible courier service with more than 45,000 offices an around 100,000 employees. It operates to all cities and towns in China along with 200 countries.

The head office of the company is situated in Beijing.

The services offered by China EMS are the same as China Post.

Hong Kong post is a state-owned courier service founded in 1841. The head office is also based in Hong Kong.

It offers both domestic and international delivery services, along with business solutions.

Some of their most popular services include:

SF Express is also a China based courier service that also owns SF Airlines. The company is based in Shenzhen, China.

It was founded in 1993 but within a decade, it emerged as the second-largest courier service in China.

It employs more than 400,000 people. The services offered for international shipping include:

But that may change in the future, as Amazon is planning to develop its own logistics capabilities:

The Wall Street Journal reported Friday that Amazon plans for the first time to pick up packages from businesses and ship them to customers. Initially, the Amazon delivery option will be only in Los Angeles and only for companies that sell merchandise through Amazon’s website.

These are baby steps, but they are important symbolically. It won’t stop with one city or one type of customer. Amazon can’t handle all deliveries on its own yet, but this is the company’s first direct move into FedEx and UPS territory.

Air freight costs are based on volume. The more you ship, the less you pay per kilogram or pound. However, there is no real price difference between air couriers.

That said, there ways to reduce the price:

The way the industry works is that freight forwarders sign contracts directly with DHL, FedEx, UPS and other air courier companies.

These freight forwarders book shipments on behalf of thousands of customers, and can get the price down significantly.

These discounts are, partly, passed on to the customer.

But, there are differences between forwarders, when it comes to:

1. The discounts they get from the air courier company (depends largely on the number of customers)

2. How much the forwarder pass on to the customer (they must, of course, keep a difference to make a worthwhile profit)

So, why not go directly to DHL or FedEx? Unless you can ship significant volumes, they will not offer you any discounts.

How do I know which company to choose?

In terms of service, my opinion is that all international air courier companies are equal. Rather than trying to figure out whether you should go for TNT or UPS, the real question is which freight forwarder you should work with.

How do I track my shipment?

All international companies offer online tracking options. Request a tracking ID from your forwarder, that you can then use to track your shipment online.